A lot of human misery and dismay—at least in the West—can be racked up to comparisons in the realms of looks, smarts, fortunes, material goods, including cars and houses, and more. Literal misery—not having a decent shelter, lacking in nutritious food and clean water—these are real, of course. But many of those of us who live above poverty level tend to compare ourselves to others in various, unhelpful ways.

One way to end our suffering is to disengage from this habit. As with any habit, awareness is the first step. Knowing that there is always going to be someone more beautiful, richer and smarter—and then letting go of that, we are safe in the knowledge that it does not matter and that we can live more at peace without making such comparisons. Each of us has unique gifts, so why compare? No two people are exactly alike, even though we may share many traits and preferences.

Prepping for my class on “The Care and Feeding of Hearts,” I was reminded of some extreme outcomes that derived from what, I didn’t realize at the time, were comparisons I’d been making.

When I was married and living in Fauquier County, Va., in the late ’90s, I got to know some people quite well. A couple of them sold produce at the farmers market in Warrenton, including some the tastiest strawberries I’ve ever had. A couple of them homesteaded. I always admired the way both sets of people lived: In their own ways, they were woven into the earth and its cycles. There was a regularity about their lives that was dictated by the flow of seasons, the flow of days and reliance by certain others—including chickens that needed food, water and movement—upon these people’s ability to show up every day.

I wanted the same thing: to live and work in the same place, to live my days tied to daily and seasonal cycles. I wanted what, in retrospect, was that level of regularity—regular schedule, but never the boredom that can come with office work. And there was a sense of safety and security, too, that I liked. But at the time, I did not explore the underlying desires, the root desires. I just thought: I want to farm. 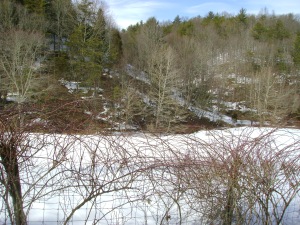 I had had the desire to farm since I was five years old. The desire faded and then got reactivated when I read Marjorie Kinnan Rawlings’ The Sojourner at about age 13, a novel that, no doubt, romanticizes farming.

Following my divorce and moving on, I continued to want the same kind of thing: to homestead, to have a side business selling my surplus produce at whatever local farmers market I happened to live near. I was living in Fairfax—uber suburbia, where land prices were skyhigh and going higher all the time for the houses that would be built close together with dinky yards—no space to grow anything!—and sell for upwards of $500,000 in the housing bubble.

My interest in energy prompted me to become unhealthily (I’d say now) obsessed with peak oil and it concomitant preparations. These two aspects—a desire to live closer to the land and to upgrade my skills so that I could weather any crisis, plus a friendship with another couple who lived in West Virginia—she, a sheep farmer, he, full-time metal fabricator and part-time farmer—spurred me to look for land. My then-boyfriend looked with me, but in retrospect, I don’t think he was all that interested.

We eventually found a place, 50 acres, mostly wooded, fairly steeply hilled (you needed to find the deer trails to get around the hills), in West Virginia just over the border from Virginia. I was set on paying it off in 10 years, to be able to leave Fairfax, get any kind of job in nearby Winchester or Harrisonburg, and start working in earnest on the place. I didn’t give much thought to the health of my relationship—or that I was operating out of two states of emotion: one in which I was comparing myself to my friends, the other, fear.

I compared myself to my friends in the ways I wanted, not when it came to practicalities. I did not stop to think about the various economics involved: My friends were older, had worked for a long time, had pensions, had saved—and had bought their places when prices were still, relatively, low. We had two mortgages on the place. We lived two hours away, so getting back and forth could be tiring, especially given traffic on 66 and 81. We poured money onto principal, getting the higher-rate loan paid off quickly. And then, later that same year, we split up.

The results of the breakup and the outcome with the house and land may warrant their own telling. Suffice it to say, we finally sold the place at a loss, though I am grateful we were not upside down as many people are today. 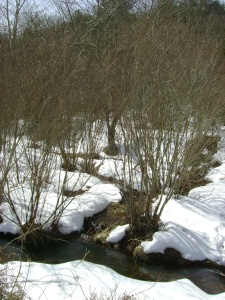 I loved the place. I didn’t mind its plethora of rocks that made planting trees an arduous, involved task. I enjoyed wandering along the stream that flowed through, spending time with the hemlocks and cedars, the old apple tree with its beautiful bark that stood, some 40 feet tall, along one of the feeder streams deep in the woods; feeling the whir of insects everywhere in the spring and summer; hearing the phoebe that nested outside the window in the morning; falling asleep to the running of the stream at night.

Why all the winter photos this time of year? Well, maybe they’ll help those reading this in our multi-day heat to cool down. Seriously, this was one of the last times I visited and the last time I took photos.