In each of us, there are hidden, often unexamined, motives for why we are the way we are, why we become the people we become.

Stephen Harrod Buhner taught recently at a workshop on the Gaian mind outside Charlottesville, Va.

After spending a weekend in early June with Stephen Harrod Buhner, author, herbalist, psychotherapist, teacher, generous spirit and more, I realize I need to examine just how much of my life has been driven not only by a desire not to suffer, but moreover not to see or feel others suffer.

A lot of healers, many people who serve as caregivers in our culture, likely have the desire not to see or feel others suffer as an overriding (or underlying) motivation, whether they care much or little about their own suffering.

I have no doubt that I’ve struggled with this my whole life: Why do bad things happen? A younger version of me wrote about the rights of crime victims on behalf of an academic publisher, and I was, during that time, intensely interested in why certain people were vulnerable to the actions of others. Another younger me was also intrigued by the culture of Russians—by their writers and artists and musicians—those people who seemed to be able to feel deeply around suffering and not have those feelings destroy them. I believe the act of creating something out of that suffering is what allowed many of them to continue living.

Suffering as a Window on Feeling
If I poke a little deeper around the issue of not wanting to suffer and not wanting to witness the suffering of others, I believe it is because it upsets us to feel. It upsets us to feel deeply, especially when the feelings are those of suffering. Take any tragedy—something that could have been prevented—Newtown or Columbine, 9/11 or the disasters involving the Challenger or Columbia space shuttles, or even the ongoing shredding of the fabric of life that manifests as habitat destruction, chemical contamination, pharmaceutical runoff, take any of these and ask yourself: How long can you “sit’ with the feelings these things stir in you? How long before you want to look away, before you go back to checking your e-mail or planning your next getaway?

My impulse is to try to distinguish between needless suffering and suffering that cannot be prevented (my way of looking away!). But where is that line?

The example that kept running through my head during Buhner’s workshop was that of Anniston, Alabama, and the residents who’ve lived with contamination by polychlorinated biphenyls (PCBs) for decades and suffered untold amounts of cancers and death because of a coverup and lack of accountability by Monsanto. History and our current times are littered with such examples.

Part of Buhner’s “consumer warning” to those who attended his workshop was that we would have certain of our deeply held beliefs shaken. My beliefs around needless suffering were among the parts of me that were shaken.

“Gaia is not afraid of death,” Buhner said. “Suffering is built into the system. Because death is inherent, so is suffering—it’s what allows innovation [Buhner’s word for evolution]. You cannot avoid suffering.

“Part of the function of people who are older is to live in balance with suffering—it gives young people hope. Safety doesn’t exist. Shit happens.”

“You have to let the world have its own suffering,” says Buhner.

By degrees, I suspect I will learn how to let go, not of caring, for what kind of human doesn’t care? But to be able to feel through sadness and darkness and emerge more whole, less fragmented because of being able to feel. In fact, learning how to feel initially creates more fragmentation within us. Learning how to interpret what we feel is what helps us piece ourselves together.

Our ability to feel is what allow us as a species to innovate—to be able to adapt. If we do not change, Buhner says, we become caricatures of humans. Being able to feel forms the basis for what Buhner calls the “ecological reclamation of the self.”

What shreds the fabric of life is ecological degradation. Habitat destruction is probably the key here, because various species, large and small, need a certain amount of habitat in which to live—to breathe, to attain sustenance, to be able to defecate without fouling the nest, to be able to reproduce, to be able to raise their young. 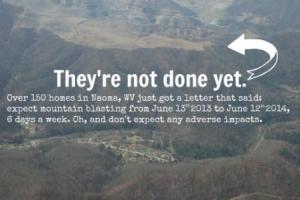 The nonprofit Appalachian Voices focuses on minimizing the impacts of coal in Appalachia and improving the prospects for clean forms of energy. Visit them at appvoices.org.

Humans, too, face habitat destruction. Certainly, whatever we do to Earth—in terms of changing biology and physiology, changing the chemical and hormonal makeup, even changing the geology—we do to ourselves.

But our self-destruction doesn’t stop there. In fact, what is more sinister and more devastating for us is the metaphysical self-fragmentation that goes along with the physical destruction of the planet. The more we fragment Earth, the more we ourselves become fragmented.

The way out is to work on becoming whole humans, to focus on the ecological reclamation of the self. And the way to do that is by learning to feel…to feel everything.

Working with Earlier Ego States—a.k.a. the Inner Children
If there is a key to being able to flow through feelings and allow them to flow through us, it is no doubt because of the inner work we do or the activities that allow us to enhance and expand our perceptions of the world around us—a walk in the woods while being fully present to all that is, or playing music or painting. We may think we know the world around us, but what do we really know?

Those who’ve grown up embedded in Western civilization are the children of the philosopher Descartes. Most of us have inherited his great misperception: “I think, therefore I am.” But it is time for us to mature, to move beyond this great fallacy, to connect with our hearts and to continue to deepen that connection. What would it be like instead to live in the mode of “I feel, therefore I am”?

No one said choosing such a path is easy. It’s hard to detach from the culture you’ve known your whole life. One method Buhner has used to be able to feel and be fully present is through working with earlier ego states. He spent 15 years, day in and day out, working with his inner children through each stage of development, allowing each one its voice and providing it the nurturing that his adult self can offer.

Going back in time, always with the question, “How does it feel?”, each feeling a variant on “mad, sad, glad, or scared”, this work allows openings in our “sensory gating channels”—the channels through which our perceptions and the meanings we derive from them are mediated. 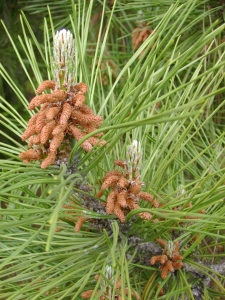 Pine was one of four plants Buhner gave workshop participants the opportunity to “sit” with. Those who sat with pine almost universally reported feeling calm and peaceful in the presence of this tree.

In the past, spending time in nature has helped me to open the sensory gates. And more recently, inner-child work has begun to bring changes to my perceptions of life as well as more meaning into my life.

I find it’s not always easy to talk to my “children.” Certain of them are stronger and louder than others; certain don’t seem to want to talk to me at all while others don’t want to stop talking. Despite the challenges, the importance of doing this work is clear to me, especially after spending some time with Buhner. The aisthesis—or heart-feeling-sense—in the room during his workshop could only have been as deep as it was because he had done that work and because we were interested in doing that work. I loved experiencing that feeling—it was one of comfort, of feeling safe enough to explore aspects of myself that are not often comfortable to explore. I hope to try to, though the inner-children work, maintain that kind of feeling.

Becoming Whole
If we look around us and we are completely honest, we see lots of people—holey people—who try to fill their holes by investing everything in their identities, or by buying things they don’t really need, or by chasing after new and different people with whom they want a relationship, however brief.

I’d guess most of us know about this. I sure do. I know because I used to be that way. My identity was tied up with my hobbies and interests. I used to buy art in order to, as Buhner might say, try to hang onto someone else’s aisthesis (or heart-feeling-sense), whatever glow emanated from the painting the painter had set down on paper or canvas.

But we each have our own heart-feeling-senses. We each have the ability to become whole. If we are to really grow—to conduct our own ecological reclamation of our selves—we’re going to have to make the time to do this work, the work of courting our heart-feelings. It’s long work and hard, but it’s probably the most important work we can do as a species.

Doing this work reinforces something that Buhner said, something that is coming to be second-nature and will eventually feel as though it emerged with me from the womb: “Just because we were abandoned does not mean we have to abandon ourselves.”

3 thoughts on “The Ecological Reclamation of the Self”